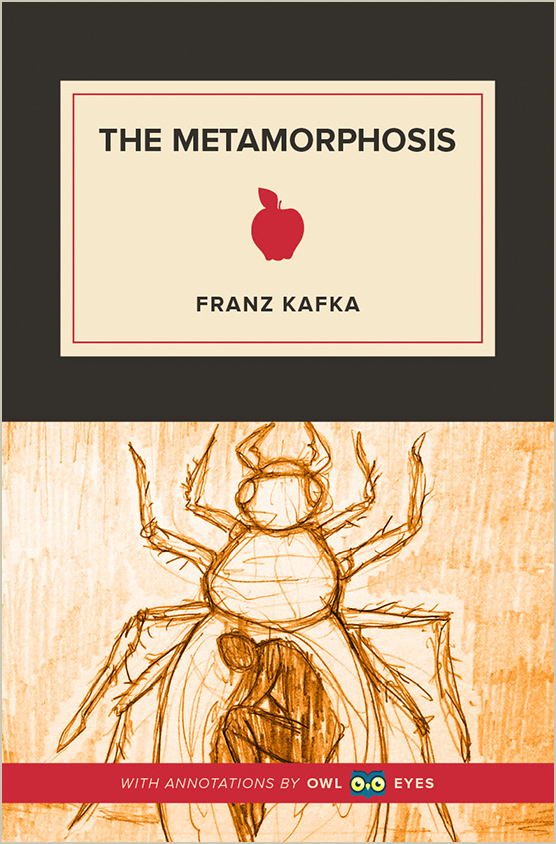 Literary Devices in The Metamorphosis

Allusion: Kafka may suggest through biblical allusions that Gregor is a Christ-like figure. After an apple—a popular interpretation of the fruit that led to Adam and Eve’s fall from grace in the Garden of Eden—is thrown at him by his father, Gregor is mortally wounded and assumes a posture similar to when Jesus was crucified. This interpretation suggests that Gregor must die in order for his family to prosper, similarly to the Christian belief that Jesus had to die for the world’s wrongdoing to be forgiven.

Point of View: The point of view closely follows Gregor in third person until his death, making him the character with whom readers most readily sympathize. Following Gregor’s death, the narrative leaps between the remaining characters but doesn’t go too far into their heads. Throughout the text, the narration is matter-of-fact in its tone, especially considering the story’s fantastical events. This detached voice emphasizes the separation Gregor feels between his human mind and animal body and between him and his family.

Imagery: The imagery throughout emphasizes Gregor’s humanity, or lack thereof. The only objects described in detail—Gregor’s childhood desk, the picture of the woman in furs—are those which link Gregor to the memories and desires of his human life. Conversely, repeated description of Gregor’s eerie insect legs and odd body serve to reinforce the mismatch between his mind and body.

Literary Devices Examples in The Metamorphosis:

It's important to note here that Kafka wrote The Metamorphosis in third person limited, rather than omniscient, giving readers access to Gregor's thoughts and feelings without having to tell the story from his perspective. Thus, this line reads as though it's Gregor's thought, though, in everything readers have seen so far, there's been no indication that he's having "fun." This line would appear then to be an instance of the author speaking to the reader and saying that this has gone on long enough.

"I mention this only incidentally..."  See in text (Chapter I)

Typically, when Kafka makes a list, as he does here, he puts the most important item of the list last, making this act of "neglecting" his work and his duties the one that the attorney is most interested in (and, of course, the reason he's visiting). Knowing this, the attorney's friendly aside here reads like a very potent warning.

"he turned his head and rubbed it on the carpet..."  See in text (Chapter I)

Notice the tenderness and the innocence of this simple action. Kafka uses it to evoke sympathy for his protagonist, who, in discovering his new body, often seems like a toddler, hurting himself in silly and yet strangely charming ways that allow readers to identify and empathize with him.

From this, readers know that there are three doors opening into Gregor's room: the main door and the two side doors. Kafka uses this small detail to indicate to the reader that Gregor is both literally and figuratively surrounded by his family, trapped by their dependence on him (and by their ingratitude). His refusal to let his father in may be the first sign of strength on his part in the book.

"without backbone or intelligence..."  See in text (Chapter I)

Keep in mind that the errand boy is the boss's minion just like Gregor. Neither of them can stand up to him, but, because Gregor carries the higher rank in the company, he's under more pressure. His backbone is a symbol of man's ability to determine one's own destiny. In his job, he's figuratively spineless, unable to confront his boss, but now that he's a pest, this lack of a backbone is a physical reality.

"and he really didn't feel particularly fresh and active..."  See in text (Chapter I)

Kafka uses understatement to emphasize the absurdity and the dark comedy of Gregor's situation. Despite having already confirmed that his transformation isn't a dream, Gregor still seems to think that he's just a regular (albeit overworked and unappreciated) person, capable of getting up out of bed in the morning and running to catch the train. Kafka's use of the word "fresh" underscores how unclean Gregor is as a pest.

"it didn't have the appearance of a pursuit..."  See in text (Chapter II)

The dance around the table reads as darkly comical, with Gregor's father following casually behind his son as he scrambles in fright. This failed escape further emphasizes Gregor's vulnerability to readers and disproves his father's theory that he is, in some way, a monster. In this passage, readers see that the only monster here is Gregor's father.

"even as a student in elementary school..."  See in text (Chapter II)

Once again, Kafka saves the most important item on the list for last. In doing so, he effectively works backward from the present to the past, establishing Gregor's timeline and reminding us that he was human and that he had an entire life before his transformation. This detail comes at a crucial moment, when it's necessary for readers to remember that, psychologically, Gregor is still a person who needs sympathy and understanding.

"and, apparently, she led the mother by the hand..."  See in text (Chapter II)

Notice the reversal of roles here: Gregor's sister, the daughter, holds her mother's hand, acting as if she's the child in their relationship and as if she must protect her mother from what she's able to witness. It's worth noting that a similar reversal of roles happens with the father when Gregor become the provider of the family. Kafka draws this parallel to suggest that the old generation, unlike the new, isn't as prepared to handle unexpected events as their younger counterparts.

"Only the sister still remained close to Gregor..."  See in text (Chapter II)

Kafka has already established that Grete is Gregor's only real ally, but this juxtaposition between her family's gradual loss of gratitude and her continued affection for Gregor suggests that she might have an ulterior motive, and that their relationship may not be as strong as Gregor thinks.

An oxymoron: the failure of a business cannot be a success, and yet Kafka uses the line anyway, implying that the only thing the father is good at is ruining his business and, by extension, his life. Kafka also uses this oxymoron to emphasize how badly the business failed: this isn't just a collapse, but an alarmingly effective one that has placed them squarely in debt. (Note that Gregor has been working at his firm for five years, starting immediately after his father's business failed.)

"God, he simply had to be somewhere, he couldn't really fly away..."  See in text (Chapter II)

Kafka breaks from the third person limited perspective to show us an example of Grete's thoughts, which appear to be harried, worried, in some ways fearful. This line, "he couldn't really fly away," underscores the absurdity of the situation, in which Grete has to imagine him as a bug and convince herself that he doesn't have wings (given how unusual his anatomy is, we can't actually be sure).

Recall that in Part II, Mr. Samsa was described as "gathering his escorts" around him while walking with Gregor and Mrs. Samsa on Sunday. In replacing Gregor with Grete, Kafka effectively edits him out of the family, stripping him both of his position (as Mr. Samsa's favorite child) and of his importance. Here, his entire family begins to lean on each other, as if to say that they never needed him, and that his sacrifices mean nothing to them.

"fell from her lap and sent out a sonorous tone..."  See in text (Chapter III)

Many things have fallen in the course of this novel: the violin, the spilt coffee, the mother when she tripped over her skirts, the attorney who had to catch himself on the stairs, and Gregor himself, falling from the ceiling. This act of falling is akin to forgetting one's self, as when the mother allows the violin to fall from her lap, which Grete has placed there carelessly, as if forgetting how beautiful her music is. Indeed, it's as if Grete has forgotten herself entirely.

"The tenants bent down over the dishes set before them..."  See in text (Chapter III)

These three tenants are a peculiar bunch and appear often to act in perfect unison. Kafka juxtaposes their similarity and their simultaneity of movement with the discord present between the three remaining members of the Samsa family, of which Gregor is no longer really a part. This juxtaposition presents an image of what the Samsas want (harmony) even as it throws their present troubles into sharp relief.

Recall that in Part I, Gregor's father hissed at him like this to force him back into his room. In that scene, the father was characterized as an animalistic, brutish man, the kind of monster who maims his own son with an apple. Here, Gregor hisses, furious at them for not closing the door, which he has hitherto wanted open. Kafka uses the repetition of this sound to suggest that Gregor's transformation into a bug-like creature is now complete.