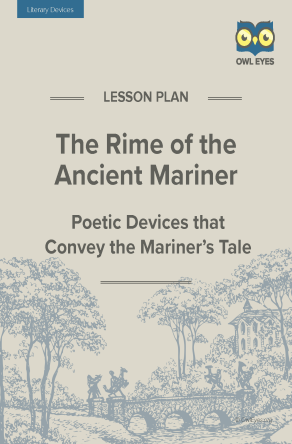 The Rime of the Ancient Mariner Literary Devices Lesson Plan

Additional The Rime of the Ancient Mariner Resources

In 1798, friends and literary colleagues William Wordsworth and Samuel Taylor Coleridge published Lyrical Ballads, a collection of poems to which Coleridge contributed four works, among them “The Rime of the Ancient Mariner.”

Revolutionary in poetic thought, style, and substance, Lyrical Ballads played a primary role in establishing Romanticism in English literature, and “The Rime of the Ancient Mariner” endures as a Romantic masterpiece in world literature. Structured in six parts, the poem is a narrative that tells a dramatic tale of the sea. Through the protagonist, an old sailor compelled to relate the strange events he once experienced on a fateful voyage, Coleridge develops the poem’s primary theme: spiritual redemption through love.

The plot in “The Rime of the Ancient Mariner” is gripping, its supernatural elements unforgettable. It is in the narrative’s poetic elements, however, that Coleridge’s intensely romantic imagination and consummate artistry are most evident. The language is beautiful and often hypnotic, punctuated by riveting scenes and haunting images. The stanzas are melodic, filled with rhythms and rhymes that draw the reader into a mysterious, dreamlike atmosphere. Through Coleridge’s skill in weaving a tapestry of vivid images and musical sounds, the reader, like the wedding guest who listens to the old mariner’s tale, is entranced. As the spellbinding story unfolds, reality gives way to Coleridge’s romantic vision, and spiritual truth is revealed.

As you work in your group to identify and analyze examples of your assigned poetry device(s), refer to your handouts (“Imagery and Figurative Language” and “Sound Devices in Poetry”), and follow these instructions in completing the class activity: