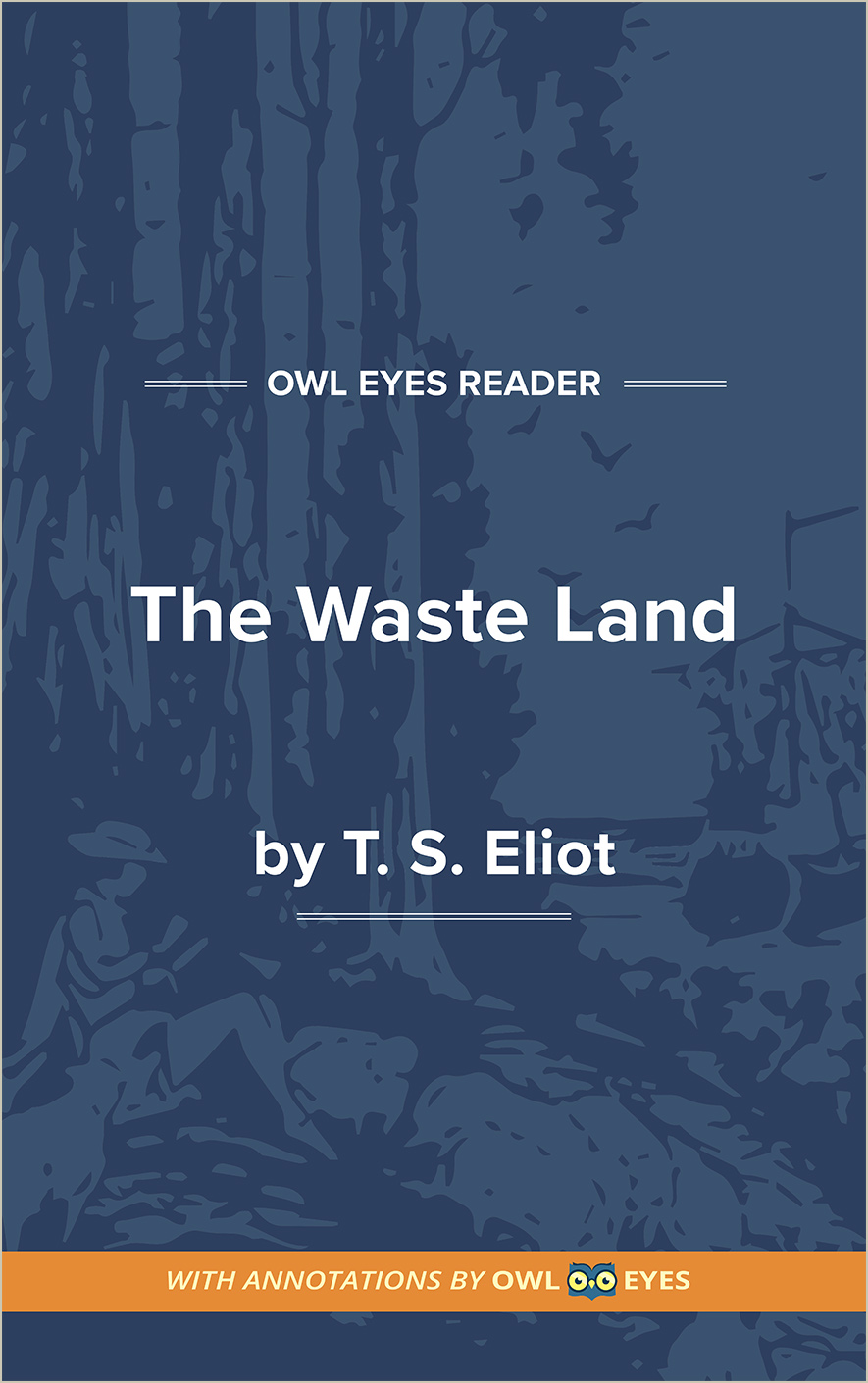 T. S. Eliot, together with Ezra Pound, revolutionized the style and structure of poetry in the early twentieth century. Eliot was a modernist poet who, as Pound claimed, modernized himself. His reading of the French Symbolists, especially Jules Laforgue, and such seventeenth century metaphysical poets as John Donne, gave him models for the use of precise imagery and complex structures that contrasted with the softness of late Romantic poetry. With his first book of poems, Prufrock, and Other Observations (1917), a new voice appeared in poetry.

Eliot was very successful as a poet and critic in his early years in London. He completed a doctoral dissertation on F. H. Bradley, the philosopher (though he never returned to Harvard to defend it), and in 1915 he married Vivienne Haig Wood. The marriage was unhappy, however, and in 1921 Eliot entered a sanatorium in Switzerland to recover from an emotional breakdown. It was during this disturbed period of his life that he wrote The Waste Land. Later that year, Eliot gave the poem to Pound, who cut it by half into its latest form. Eliot’s original title for the poem was “He Do the Police in Different Voices,” but Pound preferred emphasizing the mythic structure and cut the social satire. Upon publication in 1922, the poem was immediately recognized as a major if very difficult creation. The poet later described The Waste Land as “the relief of a personal and wholly insignificant grouse against life; it is just a piece of rhythmical grumbling.” It was read by most critics, however, as a social indictment rather than as a personal utterance.

The poem begins with an epigraph from Petronius and a dedication to Ezra Pound as il miglior fabbro (the better maker), the tribute paid by Arnaut Daniel to Dante in Purgatory of La divina commedia (c. 1320; The Divine Comedy, 1802). The epigraph portrays the Cumean Sibyl responding to the question “Sibyl, what do you want?” with the answer “I want to die.” This sets the mood of despair and hopeless resignation. In portraying the spiritual, sexual, and social emptiness of the post-World War I world, Eliot drew on Jessie L. Weston’s From Ritual to Romance (1920), on the medieval quest for the Grail, and on James Frazer’s The Golden Bough (1890-1915), especially the sections on a dying god who is resurrected. From its inception, the poem was centrally concerned with the myth of a dead land that needs to be renewed by a quester or a sacrificial god.

The first section of the poem, “The Burial of the Dead,” is a reference to the burial service in the Anglican Church. The time is April, but instead of being a period of renewal it is “the cruelest month.” The outer renewal of the seasons is not matched by that within the speakers and characters in the poem. The imagery shifts to the dryness of the wasteland, a place “where the sun beats,/ And the dead tree gives no shelter, the cricket no relief,/ And the dry stone no sound of water.” The imagery of dryness becomes a central motif in the poem and is used to define the spiritual and social aridity of the time.

Knowledge and authority in this decayed world are found in “Madame Sosostris, famous clairvoyante” and her pack of tarot cards rather than in the church or state. One of the cards in that deck, “the man with three staves,” represents the Fisher King, the wounded ruler whose disease causes the wasteland; the disease can be relieved only by the quester for the Holy Grail who successfully answers ritual questions at the Chapel Perilous. His answers complete the quest and bring fertility to the land. In the last part of this section, Eliot portrays the “Unreal City,” an allusion to Charles Baudelaire, with a crowd of dead crossing London Bridge and a corpse that is planted, which will not bloom or provide relief—a parody of renewal. The world of the wasteland is dominated by the living dead.

In the next section, “A Game of Chess,” Eliot explores the social world of the...