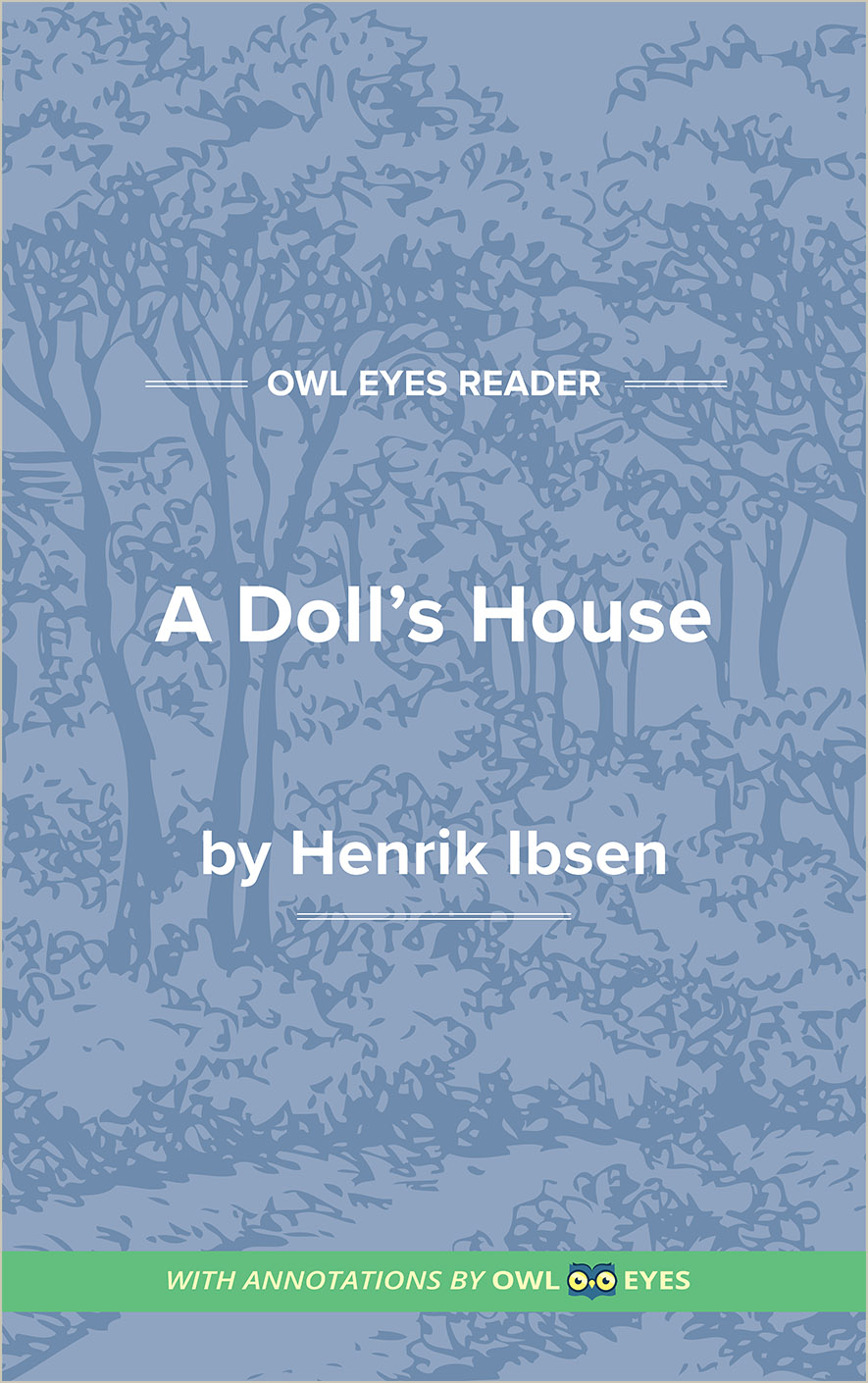 Plot in A Doll's House

Plot Examples in A Doll's House:

"your father signed this bond three days after his death..."  See in text (Act I)

Nora signed the note with her father's signature which constitutes several problems: first, this was illegal in the 1800s as women could not take out loans; second, it constitutes fraud because the signature is a forgery.

"Five o'clock. Seven hours till midnight; and then four-and-twenty hours till the next midnight. Then the Tarantella will be over. Twenty-four and seven? Thirty-one hours to live...."  See in text (Act II)

Nora’s heightened awareness of time builds tension during the transition into act III. There is now a determined timeline of how long she has left “to live” rather than a generalized sense of dread. This line also makes it clear that whether the death is literal or figurative, Nora’s life as she knows it will drastically change once Torvald reads the letter. If the “wonderful” thing happens and Torvald attempts to cover for her, Nora plans to commit suicide to protect him.

Nora narrates Krogstad’s exit and his decision to put the letter in the box. In a stage production, Nora would be the focus of this scene, with Krogstad offstage as she describes what is happening. These lines build tension as Nora watches Krogstad leave, allowing the audience to wonder if he is truly going to put the letter in the box. The letter also affirms that the central conflict of the play is not between Nora and Krogstad, since that conflict has just been resolved. The most pressing conflict will erupt once Torvald reads the letter.

"KROGSTAD: Most of us think of that at first. I did, too—but I hadn't the courage. NORA: [faintly]. No more had I. KROGSTAD: [in a tone of relief]. No, that's it, isn't it—you hadn't the courage either? NORA: No, I haven't—I haven't. KROGSTAD: Besides, it would have been a great piece of folly. Once the first storm at home is over—...."  See in text (Act II)

Krogstad does not want Nora to hurt herself and does not seem to hold any genuine ill will towards her, reinforcing the fact that he is not the type of one-dimensional villain found in the popular melodramas of the 19th century. He is relieved that she “hadn’t the courage” for the “something worse,” which in this case is suicide. He begins to comfort her by saying that it gets better “once the first storm at home is over,” but he stops mid-sentence after remembering why he is there. Though he continues attempting to blackmail Nora, he ensures that he does so in a way that discourages suicide, protecting her life even if he is threatening to ruin her reputation.

"KROGSTAD: If you had it in your mind to run away from your home— NORA: I had. KROGSTAD: Or even something worse—..."  See in text (Act II)

Recall that Krogstad was involved in a similar scandal to the one Nora is facing—one which severely damaged his reputation. Much like Nora, he resorted to illegal and underhanded dealings because society prohibited him from finding respectable work. This exchange showcases the similarities between Krogstad and Nora and draws Krogstad out of his villainous role. Though he is the antagonist of the play, Ibsen makes sure to emphasize that Krogstad is not an irredeemable villain but rather a complex character with motivations of his own.

"I should like to tear it into a hundred thousand pieces...."  See in text (Act II)

This line is indicative of Nora’s declining mental state as well as her increasing disillusionment with the role she plays in her marriage. She paces around the stage, talks to herself, and panics every time someone comes to the door. Her desire to tear the dress up reminds readers that the trip to Italy is the source of her current predicament. It also suggests that her idealized fantasies about her marriage and the role she plays within it are dissolving. She has serious financial and legal concerns to deal with that put her at odds with her usual cheerful persona.

Nora was going to ask Dr. Rank for a favor, which we can infer was probably to lend her the money to pay Krogstad back. However, her plans are interrupted when Dr. Rank professes his love for her. Nora no longer feels comfortable asking Rank for the money after this confession. We might reason that this could be because it would make the loan feel inappropriate—she would no longer be asking a good friend for money, but a professed admirer.

When A Doll’s House first premiered in Germany, a famous actress, Hedwig Niemann-Raabe, was hired to play Nora. However, she felt that the ending was unrealistic, since she could not imagine abandoning her own children. In response, an alternate ending was devised where Torvald forces Nora to see the children before she leaves. Upon seeing them sleeping peacefully, she falls to her knees and realizes that she cannot leave them motherless. Though Ibsen consented to the alteration, he viewed the alternate ending as a disgrace to the play since it undermined the themes of personal autonomy and self-discovery. The original ending, in which Nora slams the door, is far more widely used in stage productions, and reflects a more authentic culmination of Nora’s personal transformations.

"but I find it impossible to convince myself that the law is right. ..."  See in text (Act III)

Nora’s conversation with Krogstad in act I marks the start of her transition into an independent thinker. Both Krogstad and Torvald are content with the laws, but Nora tells both of them that she believes they are unfair. Notice that Nora phrases this line less as a declaration of certainty than an admission that she has tried, and ultimately failed, to convince herself that the law is correct. Not only did Krogstad’s blackmail reveal Torvald’s true nature, but it also revealed the unfair nature of the laws.

Nora’s disillusionment with Torvald becomes complete in this moment. In an act of narcissistic self-absorption, he prioritizes his own reputation over her legal standing. As a financially dependant woman and the forger of the document, Nora has far more to lose than Torvald. However, Torvald still thinks only of himself when he reads Krogstad’s second letter, showing just how self-centered he is.

Doctor Rank sought to hide his death from Torvald due to Torvald’s revulsion towards anything “ugly.” Now that the truth about Nora’s circumstances are revealed, Torvald shows his disgust and contempt over the prospect of having his reputation made “ugly” rather than play the knight in shining armor.