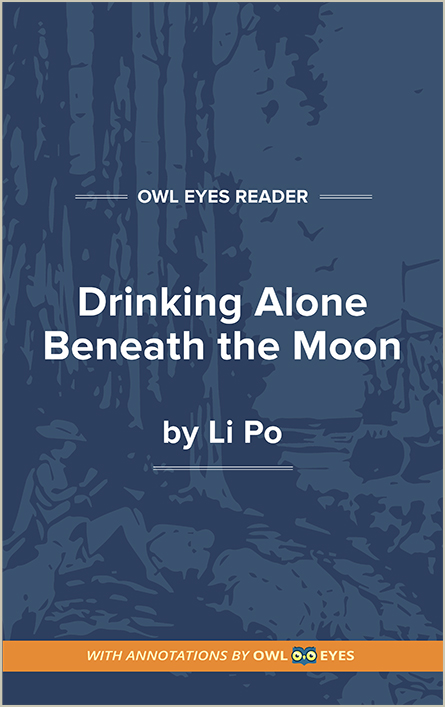 Imagery in Drinking Alone Beneath the Moon

Imagery Examples in Drinking Alone Beneath the Moon:

Drinking Alone Beneath the Moon

While the poet drinks alone, he declares that the moon and his shadow are his “friends” to give himself company. That there are “three” of them is fortunate: many cultures and faiths consider “three” to be harmonious, holy, or lucky. Li Po’s speaker then has joined three elements—a human, a celestial body, and an insubstantial, almost supernatural figure—together for this drinking ritual.

"the bright moon..."  See in text (Drinking Alone Beneath the Moon)

Li Po and many of the other T’ang Dynasty poets associated the moon with special significance and looked to it as a source for poetic inspiration, believing the Earth to be masculine and the Moon its feminine counterpart. This perception is in line with Taoist philosophy, which views everything in complementary pairs: Moon has connotations of female, femininity, in balance with Earth as male, masculine. Li Po’s speaker uses this Taoist imagery to create a connection between this philosophy and his action of drinking.