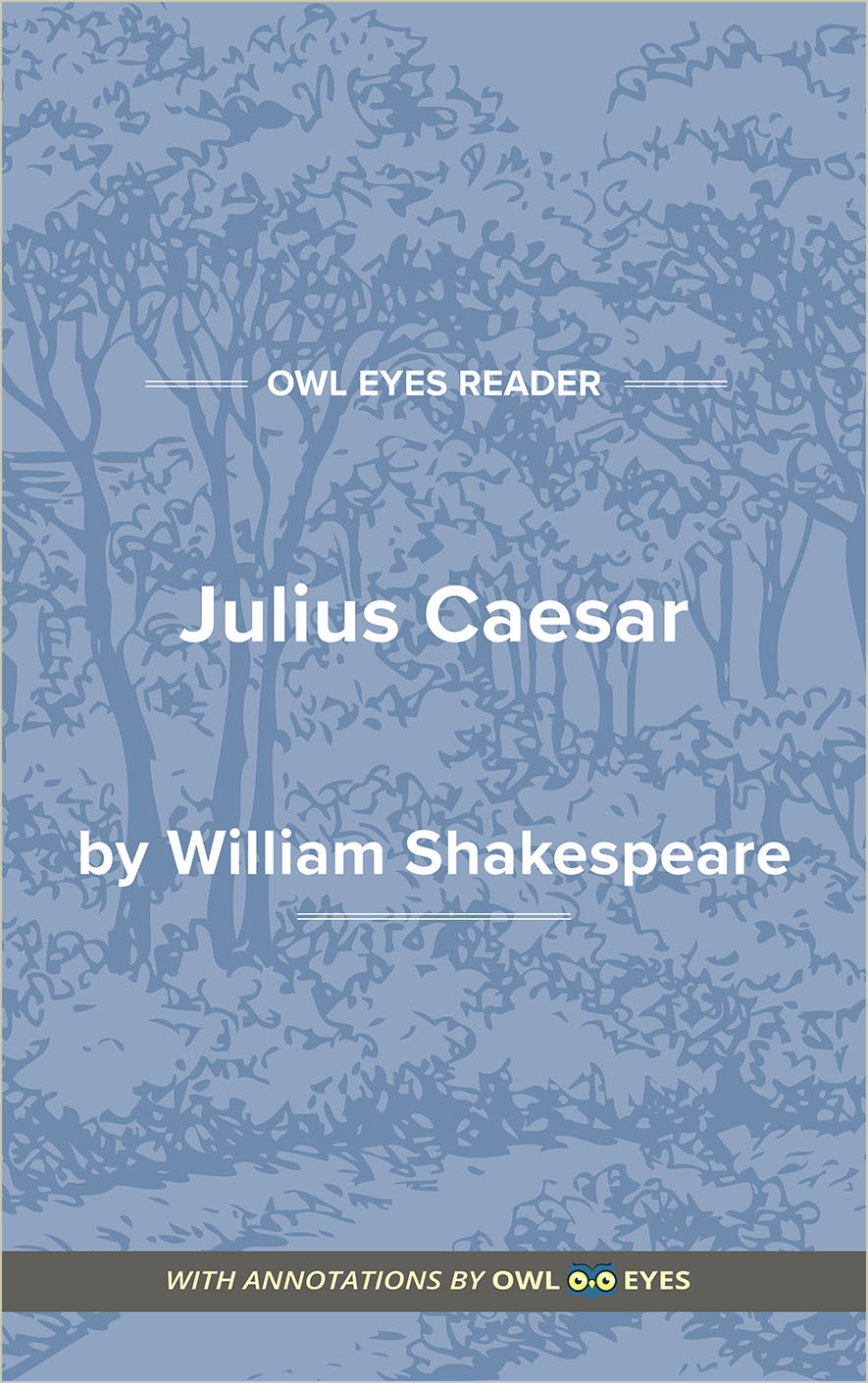 Shakespeare’s Julius Caesar is based on historical accounts of the assassination of Julius Caesar in 44 BCE. After a series of successful military campaigns and the defeat of Pompey, Julius Caesar rose into a dictatorial role. A group of Roman politicians—namely Cassius and Brutus—found Caesar’s rise to power alarming. They sought to restore balance to the Roman government by assassinating Caesar, which they succeeded in doing on March 15, 44 BCE. The assassination threw Rome into a state of upheaval. Mark Antony and Octavian Augustus formed a resistance, and defeated the forces of Brutus and Cassius at the Battle of Philippi.

"I have heard Where many of the best respect in Rome, Except immortal Caesar, speaking of Brutus,(65) And groaning underneath this age's yoke, Have wish'd that noble Brutus had his eyes...."  See in text (Act I - Scene II)

This is a pivotal exchange between Brutus and Cassius. Cassius understands that Brutus, though a close friend of Caesar, has concerns about the King’s leadership. Cassius tries to compel Brutus to ”have his eyes”: to see himself as Cassius and his fellow conspirators do. Cassius views Brutus as a potentially powerful leader, and a worthy addition to the conspiracy. We will see echoes of this dynamic throughout the rest of the play. Brutus has real doubts about deposing Caesar;. Cassius does not, and ceaselessly pulls Brutus into the conspiracy.

The playing field is being set for the mounting conflict of the final three acts. On the one side, Cassius, Brutus and the other conspirators try to solidify their control. On the other, Antony works to bring young Octavius to power in their stead.

"My credit now stands on such slippery ground, That one of two bad ways you must conceit me, Either a coward or a flatterer...."  See in text (Act III - Scene I)

Antony finds himself walking a political tightrope. A known ally of Caesar, he must hide his rage in front of the assassins for fear of being seen as an enemy. He must also admit to his love for Caesar for fear of being viewed as dishonest.

Octavius echoes Antony’s famous turn of phrase from Act III, Scene I. Leaning over Caesar’s bloodied body, Antony calls for the crowd to “Cry ‘Havoc!’, and let slip the dogs of war” (273). While Antony intended to release the Roman public on the conspirators like a pack of hounds, Octavius now characterizes those same conspirators as dogs “bay[ing]” at him and Antony.

Here Antony can be said to be guilty of the primary crime of which Caesar was accused: ambition. Antony, sensing how close he is to the throne, does not wish to share it with Lepidus, whom he perceives to be a lesser man.

"Hath given me some worthy cause to wish Things done undone;..."  See in text (Act IV - Scene II)

Now in retreat from the Roman public, Brutus appears to express some regret over “things done”—the murder of Caesar. Although Brutus has risen to the position of leader in the assassination, his words here suggest a return to his initial position of doubt about the overthrow.

"Let me tell you, Cassius, you yourself Are much condemn'd to have an itching palm,..."  See in text (Act IV - Scene III)

Brutus accuses Cassius of having an "itching palm," an insatiable, greedy desire for money and power. Brutus accuses Cassius of being too compulsive; he does not think, he simply strives to generate money by any means necessary. While these two conspirators are on the brink of battle with Antony and Octavius, their relationship begins to unravel. Brutus's insult shows that he has begun to mistrust Cassius.

Despite the tensions in the friendship of Brutus and Cassius, these characters part on touching terms. The audience gets the sense that this will indeed be their final encounter.

It is not clear whether the day of the battle marks Cassius’s birthday, as he hints. In any event, he understands the imminence of his death and takes on a circular perspective of his life. Time becomes a compass whose needle has spun its full course.

"There is so much that thou wilt kill me straight: Kill Brutus, and be honor'd in his death...."  See in text (Act V - Scene IV)

The driving force of this scene lies in the confusion Lucilius creates by convincing Antony’s soldiers that he is Brutus. In a touch of dramatic irony, the audience sees clearly that Lucilius is not Brutus. The trick works until, as we’ll see at the scene’s end, Antony recognizes the fraud.

Brutus’s suicide is striking for several reasons. In Act V, Scene III, Brutus seems to deride Cicero’s choice to commit suicide, and he decides to instead face his fate. Clearly, his fate is imminent and deadly enough to warrant a re-appraisal. Like Cassius, Brutus utters a couplet directed at Caesar before dying. Perhaps hoping to absolve himself of his crimes, Brutus admits to the half-hearted nature of his participation in Caesar’s assassination. Perhaps Brutus recalls the remarks of Caesar’s ghost—that Caesar and Brutus would meet again at Philippi—and thus addresses this couplet to Caesar.