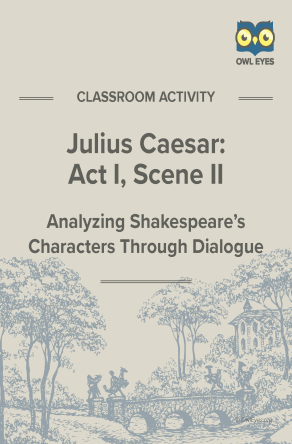 This Owl Eyes Dialogue Analysis activity for Julius Caesar gives students an opportunity to practice examining and analyzing passages from one of Shakespeare’s most popular plays. This worksheet focuses on the essential role of diction (word choice) in creating mood and subtext in each scene, developing characters, and establishing events in the plot. The main components of this activity include the following:

The Tragedy of Julius Caesar dramatizes the brutal assassination of Caesar that occurred in Rome in 44 BCE; the play also dramatizes the events leading to Caesar’s murder and those that follow as Rome is plunged into civil war. While recounting with dramatic license Caesar’s rise to power, subsequent assassination, and the war that will determine the future of Rome, Shakespeare focuses primarily on those who play essential roles in the conflicts that destroy Caesar and compromise the freedom of the Roman people—the conspirators Brutus and Cassius, the loyal but ambitious Antony, and Caesar himself. In act I, scene II, Caesar has returned to Rome in triumph after defeating Pompey and his armies and has taken control of the Roman government. His growing political power and dictatorial manner alarm some members of the Roman senate, including Brutus and Cassius; their concerns are evident in the dialogue in the scene as Caesar presides over the ceremonies at the feast of Lupercal.