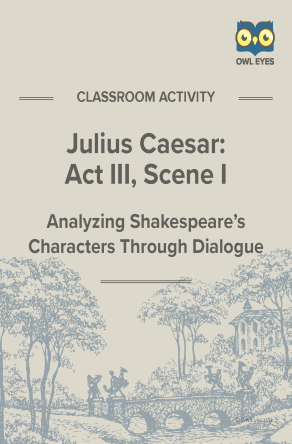 This Owl Eyes Dialogue Analysis activity for Julius Caesar gives students an opportunity to practice examining and analyzing passages from one of Shakespeare’s most popular plays. This worksheet focuses on the essential role of diction (word choice) in creating mood and subtext in each scene, developing characters, and establishing events in the plot. The main components of this activity include the following:

The Tragedy of Julius Caesar recounts Caesar’s brutal assassination in Rome in 44 BCE and its violent aftermath; the play, however, is not history. In Shakespeare’s hands, the facts of Caesar’s murder and the civil war that followed become secondary elements in the drama. Of primary importance are the characters who played major roles in determining Caesar’s fate and the future of Rome: Brutus and Cassius, Roman senators who conspired with others in the assassination; Antony, Caesar’s friend and protégé who would “let slip the dogs of war” after Caesar’s murder; and the imperious Julius Caesar himself. In act III, scene I, Caesar addresses the senate moments before he is stabbed to death by the conspirators. After the murder, Brutus attempts to justify what the conspirators have done, and Antony arrives to confront Brutus and Cassius. The dramatic contrasts among these characters are well established in the scene.