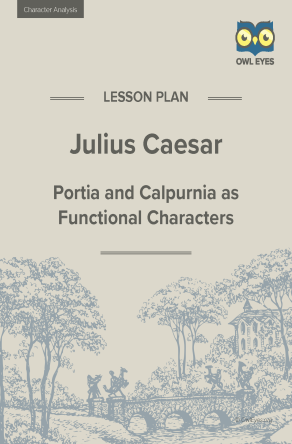 Portia and Calpurnia as Functional Characters in Julius Caesar

Based on the assassination of Julius Caesar, which occurred in the Roman Senate on the ides of March (March 15) in 44 BCE, Shakespeare’s play dramatizes the historical event by focusing on several characters who play major roles in the brutal murder and its political aftermath: Brutus, a highly respected Roman senator and Caesar’s friend; Cassius, a manipulative, jealous Roman senator who despises Caesar; Antony, Caesar’s young protégé who is consumed with rage when Caesar is murdered; and Caesar himself, who has assumed dictatorial powers in Rome.

The central conflict that drives the plot is Brutus’s ambivalence regarding the conspiracy to murder Caesar. An honorable man, Brutus struggles with his conscience as he weighs his love for freedom in Rome against his personal friendship with Caesar. Ultimately deciding that his loyalty to Rome and to the freedom of the Roman people must take precedence over his loyalty to Caesar, Brutus joins the conspiracy, participates in stabbing Caesar to death, and suffers the deadly consequences as chaos ensues and Rome is plunged into the civil war instigated by an enraged and now ambitious Antony.

In dramatizing the assassination of Julius Caesar and the subsequent events that ultimately destroy the conspirators, the play, like all good dramas, focuses on character development as the plot unfolds. Of primary importance is the development of Brutus’s and Caesar’s characters prior to the assassination. In establishing the traits in their characters that motivate their actions and lead to Caesar’s murder, Shakespeare employs various methods of characterization, including how Brutus and Caesar interact with minor characters in the play, primarily with Portia and Calpurnia. Although the two wives are not directly involved in the drama’s central conflicts and appear in only a few scenes, their presence in the play serves to reveal traits in their husbands that would otherwise remain unaddressed; it also contributes to creating dramatic suspense prior to Caesar’s impending assassination. Furthermore, Portia’s relationship with Brutus and Calpurnia’s with Caesar add an element of pathos to the drama and underscore its themes.

Julius Caesar is not generally viewed as Shakespeare’s greatest tragedy, a distinction usually reserved for Hamlet or King Lear. However, it remains one of Shakespeare’s most popular plays, and in its examination of personal honor, friendship, civic duty, loyalty, betrayal, political intrigue, and the love of freedom, it is as relevant today as it was when Shakespeare wrote it in 1599 during the reign of Queen Elizabeth I. The drama’s riveting plot, complex characters, memorable poetic language, and universal themes continue to engage audiences, making Julius Caesar a work that endures in the canon of English literature.

Working as a group, discuss these questions about act II, scene I. Refer frequently to the text as you discuss them. When your group agrees on how the questions should be answered, record your answers on the handout. Choose one person in your group to highlight the title of the scene and write an annotation that sums up what your group has decided about Portia’s role in it. Discuss the annotation as it is being written to make sure it accurately and thoroughly expresses your group’s thinking.