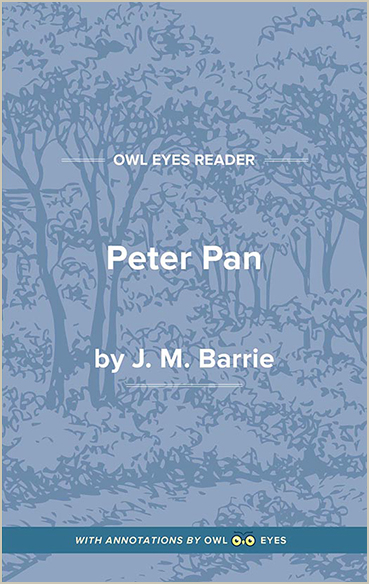 J.M Barrie was a Scottish novelist and playwright. Upon moving to London, Barrie met the Llewyn Davies brothers, five brothers who had tragically lost both of their parents. Barrie became the boys’s official guardian. Barrie played many games of make-believe, such as Pirates and “Indians,” with the brothers. A number of Barrie’s works, including Peter Pan, were inspired by these boys. In fact, each boy’s name was incorporated into the names of characters in the story; George, John, Peter, Nicholas and Michael. Tragically, like their parents, most of the brothers met untimely deaths; George was killed in combat in WWI, Michael drowned during his university years at Oxford, and Peter, who was supposedly haunted by his lifelong identification as the real-life Peter Pan, committed suicide in 1960. While Barrie wrote a number of different texts in his lifetime, Peter Pan is inarguably his most famous, and is credited with the creation of the name Wendy.

At the time Peter Pan was published in 1904, the racial epithet “redskins” was in more popular usage than it is today. Since this tale was published, the word has been recognized as offensive and has largely fallen out of use. Barrie includes Native Americans with the pirates and the lost boys to create a sense of childish imagination of an adventurous land. However, the portrayal of Native Americans as savages has also been recognized as problematic and racially insensitive.

Peter’s nickname supports the damaging racial stereotypes that Barrie has portrayed in this tale. “Great White Father” situates Peter in a position of authority and power over the Native Americans in the story, which is problematic considering the atrocities that White Europeans inflicted on Native Americans.

Chapter 12 - The Children Are Carried Off

"By all the unwritten laws of savage warfare it is always the redskin who attacks..."  See in text (Chapter 12 - The Children Are Carried Off)

This line embodies the popularized ignorance and intolerance of the times when this story was written. It’s also ironic, considering how immigrants from Europe came to North and South America and waged war for land against the Native Americans.