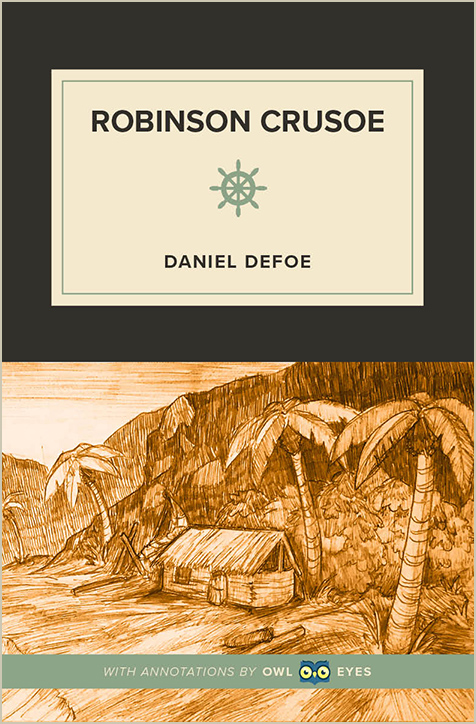 "The baking part was the next thing to be considered, and how I should make bread when I came to have corn..."  See in text (Chapter IX - A Boat)

Despite the ample sources of food provided by the island, Crusoe puts a great deal of effort into the cultivation of grains to make bread. On one level, this tendency can be read as a token of his English upbringing, a comforting reminder of home. On another level, it can be seen as a metaphor for the colonial ethos, with its emphasis on imposing European culture on foreign lands.

Chapter XI - Finds Print Of Man's Foot On The Sand

"There was my majesty the prince and lord of the whole island;..."  See in text (Chapter XI - Finds Print Of Man's Foot On The Sand)

Crusoe uses the metaphor of a kingdom where he is the ruler to show both his pride in his accomplishments and to make fun of himself. While it is impressive that he has built a habitable dwelling and survived stranded for so long, his royal “subjects” are animals, who, though they are under his care, likely do not fully obey him. He does not leave behind his imperialist mindset, as he still believes he has animals under his command. However, there might be a note of sarcasm in his description here.

"In this frame of thankfulness I went home to my castle..."  See in text (Chapter XII - A Cave Retreat)

Notice how as Crusoe’s condition gets worse, his view of his habitation becomes better. While at the beginning he was calling this structure his “sea-side home,” now it is a castle. Castles are fort-like structures where kings live. This metaphor might suggest that Crusoe sees his home as the only safe place on the island.

"otherwise they would have landed just at my door, as I may say, and would soon have beaten me out of my castle, and perhaps have plundered me of all I had. ..."  See in text (Chapter XVII - Visit Of Mutineers)

Crusoe sees the island as his own. He assumes the position of a type of king or ruler. Using the word “castle,” a medieval fortress used to house a king and his court to describe his humble hovel, Crusoe aligns himself with a European idea of power. Like the kings and queens in his homeland, Crusoe sees “all he has” as something worth plundering.