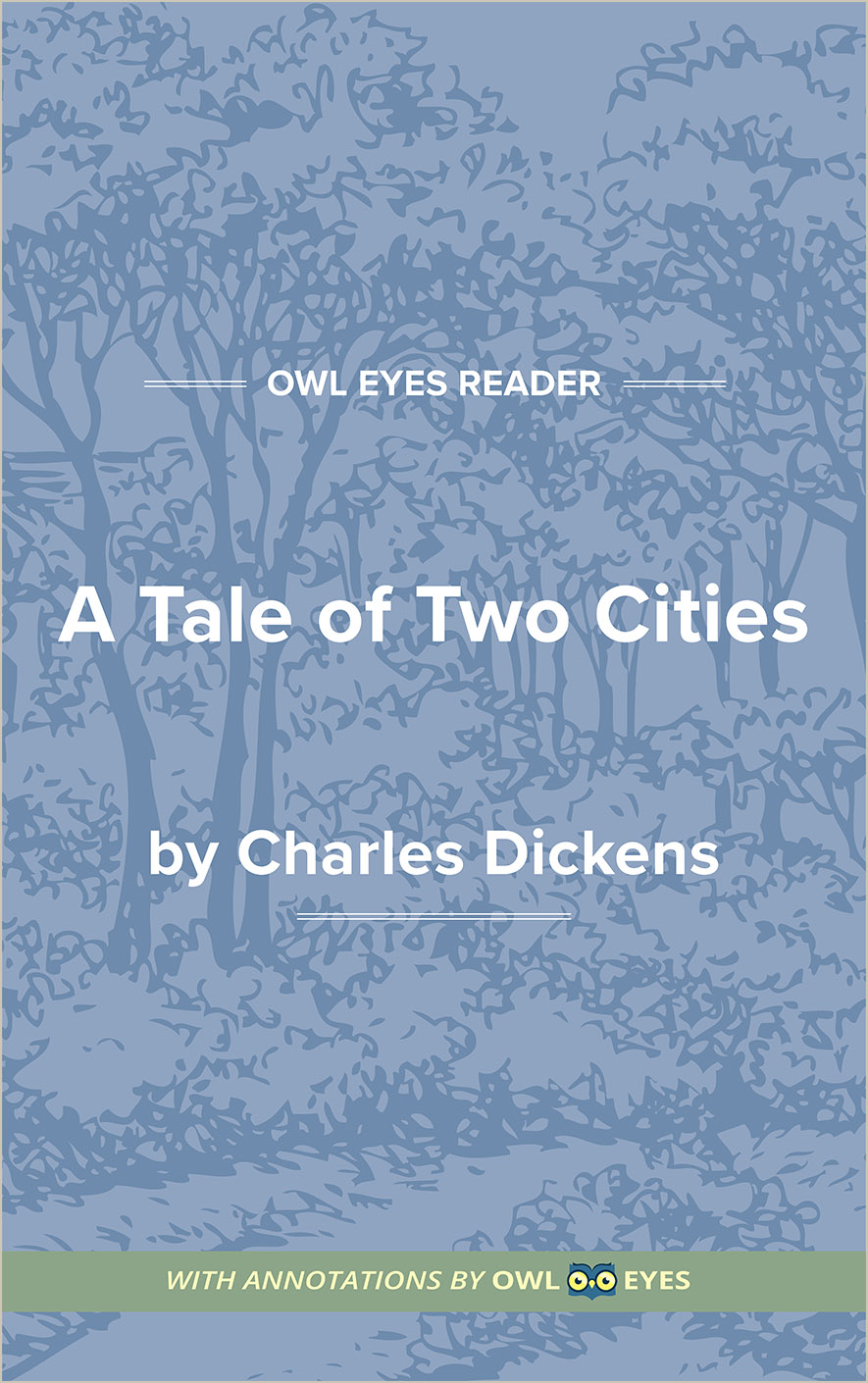 Symbols in A Tale of Two Cities

Tellson’s Bank: Tellson’s bank symbolizes the oppression and complacency of Britain. Though it is old and successful, this is more due to its reputation rather than its fantastic business; indeed, it is portrayed as unpleasant and refusing to advance with the times. Dickens suggests that Britain’s complacency, like France’s, will soon lead to unrest.

Red Wine: Because of its color, red wine is frequently used to symbolize and foreshadow the blood shed during the French Revolution. Often drunk by revolutionaries, it also suggests the intoxicating effects of revolutionary sentiment that lead to mob mentality and mass, violent cruelty.

Grindstone: The grindstone, used to sharpen weapons, symbolizes the growing maniacal blood thirst of the revolutionaries. As they sharpen their blood-soaked weapons, they become oppressors, just like those they fight against.

Echoing Footsteps of Soho Square: The square that surrounds Dr. Manette’s house is often full of people’s comings and goings. The multitude of people—and the resultant chaos—foreshadows the coming French Revolution.

Marquis St. Evrémonde: The marquis, with his unabashed cruelty and pompous arrogance, symbolizes the tyrannical and violent aristocracy that the revolutionaries wish to overthrow. His death by stabbing signals the country’s growing unrest.

Symbols Examples in A Tale of Two Cities:

Throughout the novel, Dickens uses red wine to symbolize bloodshed, specifically the blood shed during the French Revolution.

The red wine that stains "the ground of the narrow street" is another example of how Dickens uses the wine to symbolize the blood spilled during the French Revolution a decade later.

"Freedom shining on him..."  See in text (Book the First: Recalled to Life - Chapter VI)

Lucie's golden hair sparks Dr. Manette's memory. Although he does not recognize her, her image symbolizes his long lost freedom.

Book the Second: The Golden Thread - Chapter I

"more respectable..."  See in text (Book the Second: The Golden Thread - Chapter I)

Dickens uses Tellson's Bank to symbolize England's archaic and outdate stance on capital punishment. He seems to issue a warning to England against this form of punishment, especially when used to correct both serious and trivial crimes.

"extemporised strong-rooms..."  See in text (Book the Second: The Golden Thread - Chapter I)

This phrase means that one's important documents were locked away in kitchens and sculleries. Tellson's Bank—characterized as a corrupt and ineffective—symbolizes England's outdated political and economic policies during this time period.

During the 18th century, judges wore black caps to announce executions. The mention of a black cap here symbolizes England's obsession with the spectacle of capital punishment, a phenomenon also known as "gaol fever."

Most individuals accused of treason were normally found guilty and executed. Charles Darnay’s acquittal, then, is akin to a resurrection. This is another example of one of the novel's most notable themes: resurrection.

"except wine like this..."  See in text (Book the Second: The Golden Thread - Chapter IV)

Dickens often uses red wine to symbolize blood and revolutionary sentiment—specifically the growing public outrage that would initiate the French Revolution in 1789. As we shall see, Sydney Carton becomes increasingly dissatisfied with his lot in life. His penchant for wine suggests that he may be capable of violence.

Jackals—small, nocturnal, and opportunistic scavengers—appear frequently as a symbol throughout the novel. Victorians often associate jackals to hard labor with little payoff because they hide their prey in order to hide it from large predators. Sydney Carton is akin to a jackal who performs tedious, laborious tasks for Mr. Stryver, the larger predator.

Dr. Manette’s shoemaker’s bench symbolizes the trauma of Dr. Manette’s past imprisonment. Like the echoes of Soho Square, the bench suggests an uneasy and difficult future for the Manettes.

Dickens epitomizes the corruption of the French aristocracy in the character of “Monseigneur.” Monseigneur’s character symbolizes the upper-class greed and extravagance that contributed to the advent of the French Revolution.

Dickens continues to employ the imagery of the color red to foreshadow the looming revolution. The Marquis, who is "steeped in crimson" from the setting sun, foreshadows the revolution and what may become of him.

"the sun and the Marquis..."  See in text (Book the Second: The Golden Thread - Chapter VIII)

Perhaps, Dickens’s description of the sunset serves as a symbol of the fall of the French aristocracy—including the Marquis and his fellow noblemen, who are quickly losing their power.

A “flambeau” is a flaming torch. Dickens repeatedly mentions flambeaux (the plural form) in his description of the Marquis’s chateau. The image of a flaming torch, along with the formidable stone architecture of the building, suggests historical regression and cruelty—two key characteristics of the Marquis himself.

"in this vinous feature of his..."  See in text (Book the Second: The Golden Thread - Chapter XV)

Dickens personifies the city of Saint Antoine when he describes it as being in a “vinous feature” (i.e. that it, like a person, experiences the inebriating effects of drinking wine). Intoxication, in this context, symbolizes the revolutionary sentiment that would fuel the French Revolution.

The adjective “vinous” refers to the inebriating effects of drinking wine. Since Dickens employs red wine to foreshadow the eventual bloodshed of the French Revolution, the intoxication of red wine symbolizes the growing resentment of Saint Antoine's people.

Like the symbol of blood, the symbol of water recurs frequency throughout the novel. Water represents life; the fountain keeps the starving peasants alive. When the murderer is hanged above the fountain, the water becomes polluted and the peasants suffer.

"to where the sky rests upon it!..."  See in text (Book the Second: The Golden Thread - Chapter XV)

The horrific shadow of the murderer's body serves as a symbol of the pitfalls of revenge. Although the Marquis's murder was a justified act of revenge, his death only brought about more death. Dickens suggests that the French Revolution only worsened the suffering and death for everyone in all classes.

The elaborate, grandiose Palace of Versailles was the seat of political power in France and home to King Louis XVI and Queen Marie-Antoinette before they were forced to relocated to Paris once the revolution began. Versailles symbolizes the monarchy, wealth, and greed.

"and blessed her..."  See in text (Book the Second: The Golden Thread - Chapter XVII)

Lucie Manette's character serves as a symbol for redemption and liberation, although she is not the exact replica her father imagined. Later in the novel, she restores Dr. Manette's sanity and unites the family.

"a strong and extraordinary revival..."  See in text (Book the Second: The Golden Thread - Chapter XIX)

Dr. Manette’s dramatic “‘revival,’” which today might be classified as a symptom of post-traumatic stress disorder, is another indication of Dickens’s opposition to solitary confinement. Furthermore, it is significant that the otherwise-brilliant physician transforms into a confused shoemaker when his traumatic past is recalled. Dr. Manette’s shoemaking implies that imprisonment (as it existed in 18th-century Western Europe) undermines the Enlightenment ideals of rational thought, innovation, and social progress.

Dickens suggests that Lucie (the “Golden Thread”) figuratively knits her family into a close, nurturing community. Lucie’s figurative knitting can be contrasted with Madame Defarge’s literal knitting of people’s names into her register. Both women “knit” in secret: Lucie passively exerts her quiet influence, and Madame Defarge knits in a code that only she can understand.

Dickens repeatedly uses echoes to symbolize fate—specifically, the inevitable arrival of the French Revolution. Lucie can hear the sinister energy of growing social unrest in the “echoing footsteps of years” and can do nothing to stop it. The footsteps themselves likely represent the marching of an angry mob, such as the one that would storm the Bastille in Saint Antoine in 1789.

Book the Third: The Track of a Storm - Chapter III

Mr. Lorry does not yet recognize the Defarges’ influential role in the revolution. Madame Defarge’s knitting, though possibly benign in this specific instance, symbolizes and foreshadows her complete lack of sympathy for Charles Darnay and his family.

Book the Third: The Track of a Storm - Chapter V

"all red wine for La Guillotine..."  See in text (Book the Third: The Track of a Storm - Chapter V)

Dickens once again employs the symbol of red wine to represent the bloodshed that characterized the French Revolution. Furthermore, he implies that these executions do not bring about social justice; the “red wine for La Guillotine” only intoxicates the republic with a heightened thirst for revenge.

Book the Third: The Track of a Storm - Chapter XV

"fused in the one realisation, Guillotine..."  See in text (Book the Third: The Track of a Storm - Chapter XV)

The guillotine, as we have seen, is frequently personified throughout the novel—even to the extent that Dickens describes its victims as “red wine for La Guillotine.” Dickens’s portrayal of the insatiable La Guillotine suggests that this brutally violent machine is symbol of the republic itself.