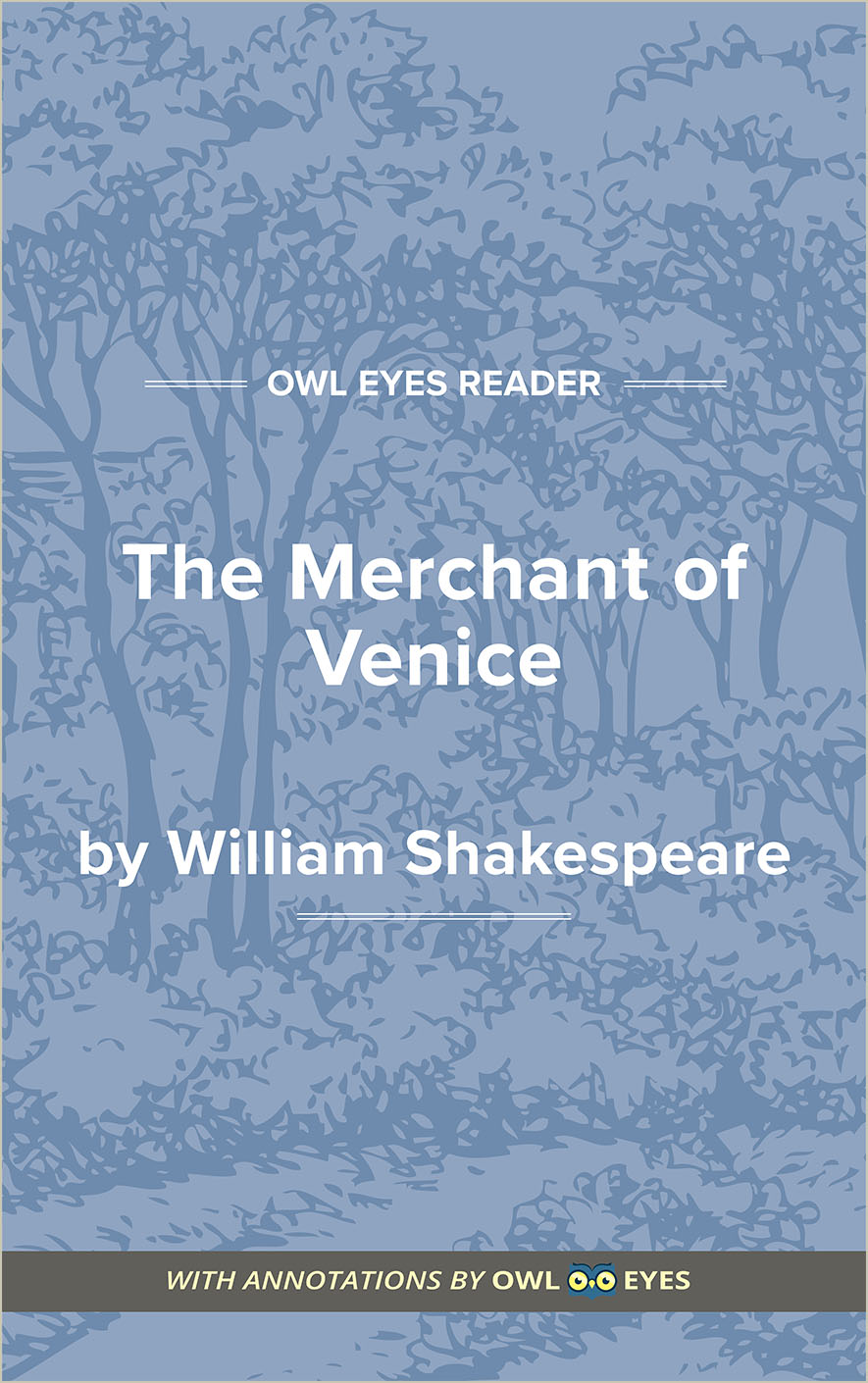 Themes in The Merchant of Venice

Prejudice: The main theme of this play is prejudice on both sides: the Christians hate Shylock because he is Jewish and Shylock hates the Christians. However, Shylock gives the audience legitimate reasons for his prejudice: their religious opposition to his money lending, or usury, and active persecution of his buisness and body. The play also reveals the double standard under which Shylock lives and the despicable nature of the Christians’ hatred. Shylock is expected to show mercy when he is never shown any by the ruling class.

Money: The other major theme in the play is the importance of money to the Christians. To most of the Christians in the play, money is more important than anything else. Metaphors about love and devotion are often cast in monetary terms in order to show that value is determined by money to these characters. Even love is seen as a contractual agreement.

Playing and Perception: Throughout the play, appearances are shown to be deceptive. In the trial of the three casks, the outwardly ugly cask has the most rewarding interior to symbolize the disconnect between outward appearance and inward character. This theme, however, extends to the question of prejudice and the perception of the characters in the play. Shylock’s famous speech “Hath not a Jew eyes?” asks the audience to look further into his character and motivations rather than discrediting him as a villain. Embodied in the well-known line “all that glitters is not gold,” there is more to this story than what is on the surface.

Themes Examples in The Merchant of Venice:

In claiming that the world is a stage, Antonio highlights the affected nature of his sadness. He is playing the role of melancholy rather than actually feeling melancholic. Gratiano picks up on this hole in Antonio's metaphor and exploits it to insinuate that Antonio is only sad so that he can appear more profound to others. This exchange introduces the theme of playing and perception early on in the play.

A "maid not vendible" is a metaphor for an unmarried woman. With this metaphor, Gratiano turns women into commodities that can be bought and sold. Notice that most of the metaphors up to this point have been concerned with money.

Notice that like Salerio and Salanio, Gratiano interprets Antonio's sadness as coming from a preoccupation with his wealth and fortune. This highlights the extreme value of money among Antonio's friends.

"Strange" here means distant. Notice again that Salerio and Salanio place their business ventures above their friends in order of importance. This underscores the importance of money within the play.

Antonio dismisses the claim that he might be in love instantly. Notice that their first proposal, that Antonio is sad about his investments, is explained over multiple lines while Antonio immediately cuts off the possibility that his sadness could be caused by feelings. While in most comedies love is more important than money or social rank, here money seems more important than love.

By "wind", Salerio means his breath used to blow cool air onto hot soup. He compares his breath to wind at sea which might cause a storm and destroy his boat. Notice that Salerio equates his breath, that which sustains his life, with his investments. Salerio and Solanio's understanding of Antonio's melancholy demonstrate the extreme importance of money to these principal characters.

Solanio highlights the importance of money at the beginning of this play. He believes that Antonio's sadness comes from his preoccupation with wealth and believes that one's "ventures," monetary investments, are directly connected to one's emotions.

Nerissa claims that those who have a lot often grow older faster than those who have little. Though the characters in the first half of the play value money above all else, here Nerissa offers an alternative theme: excess is corrupting and moderation is liberating.

A major theme of this play is the racial enmity between Jews and Christians. The hatred between Antonio and Shylock can be read as a portrait that reflects larger patterns of racial hatred. Notice that Shakespeare's play offers a more complex understanding of how racial tensions play out in these characters's interactions beyond racial hatred. Shylock does not simply hate Antonio because he is a Christian, but because Antonio's Christian ethics threaten Shylock's livelihood.

Notice that both Gobbo and Launcelot do not give each other room to speak. Gobbo is long winded and attempts to fill his speech with flowery language and metaphors. Launcelot cuts him off to get to the point. In other words, Launcelot believes he can do it better than his father. This picks up the themes present in Portia's storyline in a comedic and low space: like Launcelot, Portia is subject to her father's intervention in her affairs. Like Launcelot, Portia believes that she could do better than her father.

Notice that Lorenzo's love for Jessica is introduced with a description of her skin. Again, outward appearances are shown to be more important than one's inner make up in this play.

Much of this play explores the theme of outward appearance vs. internal content. From the caskets that are outwardly beautiful but inwardly grotesque, to the Christians with outward claims of piety and inward desires for wealth, gender reversal is yet another instance in which something is not as it appears to be.

There is literary evidence for this proverb that pre-date Shakespeare's play. However, The Merchant of Venice made this saying universally recognized. "All that glitters is not gold" accurately sums up the theme of the play: external appearances often belie the internal state of something.

A "carrion Death" is a colloquial term used to refer to a rotting human skull. Notice that the inside of the chest does not correspond to what is written on the outside, since men do not desire rotting skulls. The caskets emphasize one of the play's themes of something's appearance not matching its content.

Notice that two major scenes which could demonstrate a depth of feeling and character development (Shylock mourning the loss of his daughter and Antonio saying goodbye to Bassanio) are not depicted on stage. Instead, both scenes are reduced to the shallow interpretations of lesser characters. This touches on one of the play's main themes that perspective shapes how we see characters and their identities. This scene develops this theme by asking the audience to question identities presented by unreliable perspectives.

Notice that we do not watch Shylock say this, we hear it second hand from Solanio. In Solanio's retelling, Shylock confuses his ducats with his daughter; he seems more upset about his money than the loss of his daughter. However, we should question this account as it comes form someone who hates Shylock. This highlights the theme of perspective within this play: one's identity is based on the way someone is presented to the audience instead of the actual content of their character.

"Iwis" means certainly. The scroll compares fools covered in silver to this box, which ended up being a fool's portrait covered in silver. Again, the caskets emphasize the theme of something's inner content being in tension with its outward appearance.

Bassanio's language quickly turns from love to a contractual agreement. The bond between Portia and Bassanio reflects the bond between Shylock and Antonio and suggests that the action of this play revolves around monetary and legal contracts instead of love, friendship, or human emotion.

Antonio's condition gets at a major theme of the play: appearances versus reality. On the surface, this might seem like a positive request from a Christian perspective; in forcing him to convert, Antonio "saves" Shylock's soul. However, a conversion without conviction means nothing, a fact that would not go unnoticed by a Shakespearian audience that was alive during England's break with the Catholic Church. Antonio's requirement thus undermines not only the sanctity of his religion but the religious values he professes to have. Therefore, while this appears to be a form of "Christian mercy," it actually reveals how vacuous the Christian's faith is.

The Duke offers Shylock to reduce the amount of money he owes the state to a fine by acting "humble." In other words, the Duke asks Shylock to beg for his money. This is neither humility nor mercy on the part of the Christians. The Christians seek to take Shylock's money, the only thing that gave him any power within Venetian society, and force him to grovel to the privileged class. This is a form of humiliation meant to put Shylock back in his place. In pardoning Shylock, the Duke does not offer him mercy but rather makes him an example to all other marginalized peoples that attempt to upset the status quo.

Notice that now that she has the upper hand, Portia abandons all notions of mercy. She asked Shylock to show Antonio mercy, and when time comes for her to offer Shylock mercy, she instead decides to punish him. This action demonstrates the double standard under which Shylock lives: he is expected to be better than the Christians, to turn his cheek even though they do not show him the same kindness.

Remember that Lorenzo knew Portia just by the sound of her voice. Here Bassanio touches on the main problem of his love for Portia: it is based on sight and context rather than actual knowledge. Their love touches on one of the play's major themes the difference between something's appearance and something's content.